Blasphemy Rosin is a collab with award-winning concentrate company Suprize Suprize, using Alien Labs terpene-rich living soil cannabis. It’s a creation of first-pull live rosin that is hand-whipped with high terpene content live resin sauce. Rosin and Live Resin together may be considered Blasphemy, but we believe it provides you with a fully amplified, full-spectrum effect.

Sugar Cone was definitely a keeper based on the nose alone. It has one of the most unique smells on a gelato cross we’ve done. It’s a sweet cream, cookie nose with a blast of sangria; a perfect blend of both parents. The taste is smooth with a nice hybrid high that settles behind the eyes after the initial “space cadet” rush. This strain not only smells good, but it also looks like it was rolled in some dry sift hash as an added bonus. 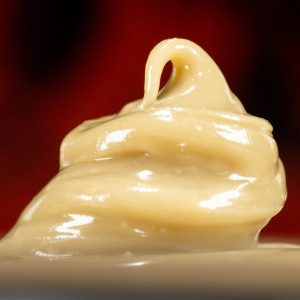